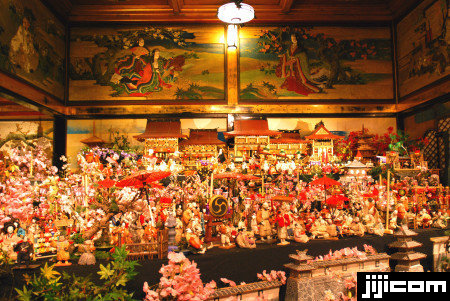 An annual exhibition of antique 'hina' dolls started at the Hyakudan Kaidan exhibition hall in Tokyo, bringing together more than 800 dolls from all seven prefectures in the Kyushu region, including Kumamoto, which was hit hardest by a series of massive earthquakes in April 2016. The eighth 'Hyakudan Hinamatsuri' exhibition runs through March 12 at the tangible cultural property designated by the Tokyo metropolitan government in wedding complex Meguro Gajoen. Hina dolls are traditionally displayed for the 'Hinamatsuri' festival on March 3 to wish for the well-being of girls. Most dolls represent the Emperor and the Empress, as well as palace attendants and musicians in the Heian period.